The sounds of the water, the music that makes the waterfront unique…lately it has been the low and throaty “waaass up,where are you baby?” of my friend here.  A song that is distinct in its tone and melody, as the male seeks to attract his mate.

Mostly one note, over and over, but sometimes 2, the second being a long soulful longing for his lover, he sends out the call that he is available.  I have only heard him, up until today…when he decided to show him self off only for a moment, as he floated in the weeds checking out the water front activity. 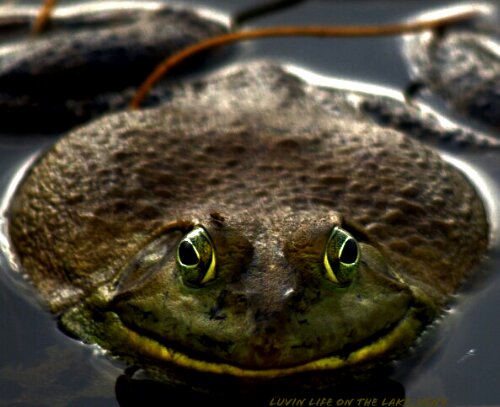 I can only imagine what he was thinking when confronted with the camera…but he seemed happy to pose, realizing that most times he is only heard …and not seen.   Although he has been serenading me to sleep nightly, he could tell I was not his type, so remained silent as he was captured in the majic of the moment …

of looking for luv on the lake …usny.