Technically,  not …As a blue moon is commonly thought to be the 2nd full moon in the same month, which is rare, thus the expression. 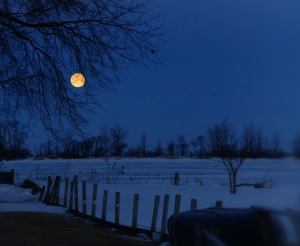 Due to as misinterpretation in March 1946, by the Sky & Telescope magazine,  this common definition is actually incorrect.  Folklore named each of the 12 moons in a year, so when thirteen appeared, it got the name, the other 12 keeping theirs.   Harvest moon and hunters moon occur in the fall…

According to The Farmers Almanac, and the technical definition “blue moon” is the third full moon in any period between either solstice and equinox, or between equinox and solstice, which contains four full moons.

March is actually a worm moon, April a pink moon.  Summer brings us a flower, strawberry, buck and sturgeon moon.

Although not as rare as rare as the technical term, the chance at this view is still qualifies as a rarity.   Only once a month, clear skies, up early enough to capture it’s decent, and a decent shot, the moon, not easy to get.